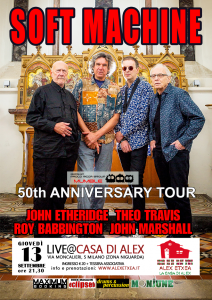 PLEASE HOWEVER NOTE THAT THE RESERVED SEATS ON THE MAP ARE ONLY A PART OF THE SEATS AVAILABLE IN THE HALL, THE EVENING OF THE CONCERT WILL BE AVAILABLE  OTHER SIDE SEATS (NOT BOOKABLE) AND ANYWAY THERE IS THE POSSIBILITY OF ASSISTING TO THE CONCERT STANDING. 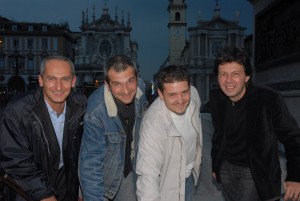 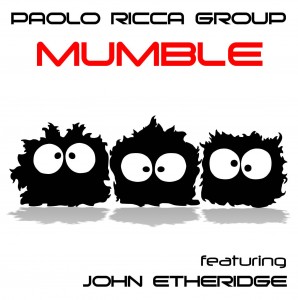 Soft Machine is one of the greatest UK avant/jazz-rock bands of all time. Their work, from their earliest performances as a psychedelic band, who were contemporaries of, and shared stages with Syd Barrett’s Pink Floyd and the Jimi Hendrix Experience, all the way to being one of Europe’s best known ‘fusion’ bands has influenced several generations of bands, and continues to be name-checked by today’s hip experimentalists.

This is three quarters of the celebrated 70’s version of the legendary group which recorded the acclaimed ‘Softs’ album in 1975, completed by outstanding sax star Theo Travis (Robert Fripp/David Gilmour/Gong). The band plays material from the era (compositions by Hugh Hopper, Mike Ratledge, Karl Jenkins) as well as many contemporary works, as featured on their brand new album ‘Hidden Details’, released in 2018, exactly 50 years since the release of the band’s 1968 debut album ‘The Soft Machine’.

Whilst the line-up of Soft Machine may have changed many times since the heady days of the late 1960’s, the band’s spirit of musical adventure, and the ease with which it freely avoids being pigeon holed and can move from powerful progressive jazz fusion to atmospheric psychedelia to free improvised jazz-rock to ambient loop music continues to make it both unique and totally contemporary.

“Soft Machine Legacy” was launched in Turkey in Oct, 2004. The intriguing line-up of Elton Dean, Hugh Hopper, John Etheridge and John Marshall was a coalition of 4 long-time servers in different eras of the legendary group Soft Machine, but who had not played before as a unit. With the enthusiastic management of MoonJune in New York – the band quickly established a recording and touring schedule in Europe playing a repertoire of new originals and some vintage pieces. Highlights including appearances at the Umbria Jazz Festival and Leverkusen Jazz Festival (televised).

In 2006 came the sad death of Elton Dean, whose place was taken by young blood Theo Travis, who has a continuing association with Progressive Bands and Artists such as Gong, Robert Fripp, David Gilmour and Steven Wilson and was thus perfectly sympathetic to the music.

After a long illness Hugh Hopper sadly passed away in 2008. A decision was taken to continue with Roy Babbington – thus reuniting 3/5ths of the 1975-77 line up that recorded the acclaimed “Softs” album

The beauty of Soft Machine’s legacy – and of Soft Machine Legacy, the band – is that nearly a half-century after the original group’s inception, that legacy is far from stagnant but continues to evolve to this day. Ever since Soft Machine Legacy was first formed, the group has amply demonstrated that it is no mere exercise in nostalgia, lazily mining the Soft Machine back catalog; instead, SML has admirably carried the parent group’s spirit of inquiry and exceptional standard of musical excellence forward into the present.

Just as the original Soft Machine was in a state of continual metamorphosis in terms of both personnel and musical approach – shape-shifting over time from a psychedelic pop band, to a proto–prog rock outfit, to pioneers of adventurous jazz-rock fusion, and ranging from trio to septet configurations – Soft Machine Legacy has been in constant flux as members have come and gone, each new arrival placing his distinctive stamp on this musical work in progress. It is a tribute to the open-ended nature of Soft Machine’s ingenious compositional frameworks that they can accommodate such a wide range of strong musical personalities.

Since 2016 the band formerly known as Soft Machine Legacy was from then on rightfully called ‘Soft Machine’. The Legacy tag, never in fact legally required, was officially been dropped. This is Soft Machine – a living, breathing music that is as vital and relevant today as it ever was. Both longtime fans and new converts alike can take heart in the knowledge that the Soft Machine family tree — with its deep roots in the musical revolution of the ‘60s — continues to sprout healthy new limbs well into the new century, showing no signs of slowing. … The legacy is in very good hands, indeed.